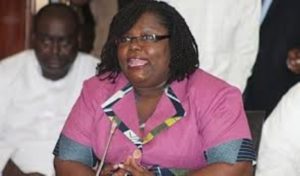 Ghana yesterday (March 17, 2016) spearheaded a global campaign to end Child, Early and Forced Marriage in view of its harmful effect on the victims.

At a breakfast meeting on “Ending Child Marriage in Ghana And West Africa “ held at the Permanent Mission of Ghana to the United Nations in New York, the speakers stressed the urgent need to end the evil practice, which is more prevalent in the developing countries.

Organized by Ghana’s Ministry of Gender, Children and Social Protection, the event held on the sidelines of the on-going 60th Session of the United Nations Commission on the Status of Women at the UN headquarters in New York drew ECOWAS Gender Ministers, Development Partners, the diplomatic community, officials of UNICEF, UNDP and civil society organizations to discuss and find ways to end the practice.

Setting the tone for the discussion, the Minister for Gender, Children and Social Protection, Nana Oye Lithur said whenever child marriage happens, it “truncates the education, economic opportunities and security of the girl child”.

The Minister argued forcefully that what actually happens in child marriage is rape and defilement because it amounts to physical abuse, as a child cannot consent to sexual activity.

She revealed that the national prevalence rate for child marriage is 27 per cent, but it goes up to about 50 % in the northern part of Ghana, which is among the poorest regions.

Current statistics the Minister said showed that one out of every five girls was likely to marry before reaching 18 years.

“There is also a regional dimension to this, the rural-urban disparity. So a girl in the rural area in Ghana is more likely to get married twice as much as the one in the urban area. So it is 36 per cent against 19 per cent”, Nana Oye Lithur pointed out, adding that ‘there is a direct linkage between child marriage, poverty, culture and tradition”.

Some of the driving factors influencing child marriages that the Minister mentioned are teenage pregnancy, fear of stigmatization, protecting virginity and conforming to traditional norms and customary practices.

To address the issue of child marriages, the Minister stated that the Ghana government has a comprehensive legal frame work, including the Children’s Acts of 1998 that prohibits child marriages, has criminalized child marriages, apart from entrenching it in the Criminal code. There is also an increased community engagement and dialogue with stakeholders, media campaigns and mass media communication materials, documentaries and advertisements to drum home the message against child marriages.

Mr. Cornelius Williams, Associate Director,Child Protection of UNICEF stressed that the mere passing of laws do not stop the issue of child marriages but the effective implementation of best practices and existing laws were the best antidotes to the issue.

On her part, the Liberian Minister of Gender, Children and Social Protection, Madam Julia Duncan-Cassell condemned child marriages and agreed to a regional approach in solving the problem, since the perpetrators are likely to move to other areas or countries without effective implementation or checks to carry out their nefarious activities.

“We respect our traditions and culture, but those harmful practices that affect our people and girls must be stopped’, Madam Duncan-Cassell summed up her point.

Contributing, Madam Edwidge K.M. Mutale, Permanent Secretary, Ministry of Gender, Zambia said the use of chiefs and other community leaders to tackle the problem has proven to be an effective way of solving the problem of child marriages in Zambia.

More so, she pointed out that the problem was more prevalent in the rural areas, where the chiefs and other traditional leaders have a lot of influence.

Ambassador Martha Ama Akyaa Pobee, Permanent Representative of Ghana to the United Nations said “the incidence of conflicts, disasters and emergencies tend to aggravate this harmful practice, which affects the physical and psychological health development of the girl child, while at the same time consigning them to a cycle of poverty and often social isolation”.

The essence of the meeting therefore, she said was to tap into the global momentum to engage donors and partners for the effective implementation of the campaign in Ghana and also serve as a platform for the ECOWAS Ministers and experts to discuss the development and adoption of an ECOWAS resolution on child, early and forced marriage.

In her view, Baroness Sandy Verma, Minister for International Development of the United Kingdom expressed the support of her government for Ghana’s efforts and leadership in galvanizing ECOWAS and the world into action to stop child marriages.

Mrs. Laadi Ayii Ayamba, Chair of the Parliamentary Committee on Gender in Ghana took a swipe at those who hide behind religion to marry children, saying that “child marriage is not religious, neither is it Islam“,emphasizing that marrying young girls as young as 10years is wrong”.

To this end, she urged civil society groups, all communities and opinion leaders to join hands in stopping the practice of child marriage, because it affects the health and well-being of the girls.

To buttress a point, the MP said that if her early marriage had worked, she would not have continued schooling to merit a job as a teacher and her present position.

At his turn, Mr. Moribadjah Keita, Director of Regional Action To Protect Children in Guinea supported efforts to stop early marriages through a concerted regional solution since the problem is a common one that requires all hands on deck.