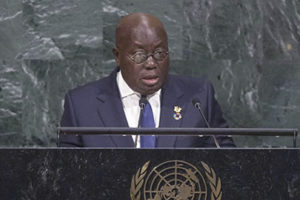 The Presidency – The President of the Republic, Nana Addo Dankwa Akufo-Addo, has drawn attention to the urgent need to reform the United Nations.

According to President Akufo-Addo, UN reforms have been talked about and scheduled for a long time; but somehow the courage and the will have never been found to reform the United Nations.

He continued, “We cannot continue to preach democracy and fairness around the world, we cannot insist on peace and justice around the world, when our global organisation is not seen by the majority of its members as having a structure that is just and fair. It is, indeed, seen by many as helping to perpetuate an unfair world order.”

The UN, President Akufo-Addo stressed, provides the best vehicle for the world to manage its many varied problems, adding that “we would undermine its credibility and fail in our duty if we do not reform the United Nations. We dare not let ourselves and future generations down. The time for reform has come.”

President Akufo-Addo made this known on Thursday, 21st September, 2017, when he delivered his address at the 72nd Session of the United General Assembly, currently ongoing at New York.

In talking about sustainable relations, the President noted that Africa, and, indeed, Ghana, remains committed to remaining a nuclear weapon-free continent.

It is for this reason, he said, that three weeks ago, highly-enriched uranium was flown out of Ghana back to China, signalling the end of the removal of all such material from the country.

“Our nuclear reactor has, subsequently, been converted to use low-enriched fuel for power generation. A world, free of nuclear weapons, must be in all our collective interest,” he added.

President Akufo-Addo reaffirmed Ghana’s commitment to maintaining friendly and cordial relations with all the countries and peoples of the world.

“The full engagement of Ghana, through the Economic Community of West African States (ECOWAS), in the process of West African integration, and through the African Union (AU), in the process of African integration, remains a goal of my government. Regional and continental integration are in Ghana’s interest, as they represent one of the surest ways towards establishing the conditions for prosperity in our region and on the continent in the decades ahead, as well as helping to ensure peace and security and combating the scourges of terrorism, extremism and intolerance,” he noted.

The conflicts that continue to plague our continent in Libya, South Sudan, Congo DRC, and Mali, the President said, would be more effectively resolved if the international community was to support, not undermine, the efforts of our regional and continental organisations to deal with them.

President Akufo-Addo assured further that “Ghana will also continue to be active in the multilateral organisations to which we belong, such as La Francophonie, the Commonwealth of Nations, and this United Nations, because we believe multilateral action and international co-operation are in the interest of all of us.”