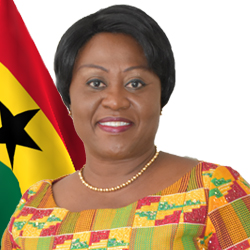 Permanent Representative to the United Nations

Prior to becoming the  Ghana  Permanent Representative to the United Nations, Ambassador Martha Pobee was a career diplomat, serving in the Ministry for Foreign Affairs. She was posted in Tel Aviv from 2000 until 2004. She was Head of Chancery at the Ghanaian Embassy in Washington D.C. from 2006 until 2010, Director of the Information and Public Affairs Bureau at the Ministry for Foreign Affairs from 2010 until 2012, and Deputy Head of Mission at the Ghana High Commission in Pretoria from 2012 until 2015. She was appointed as Ghana's Permanent Representative to the UN by President John Dramani Mahama in July 2015, the first female to hold the position. Ambassador Martha Pobee obtained her bachelor's degree in English and philosophy from the University of Ghana and her master's degree in development studies from the International Institute of Social Studies in The Hague. She also studied multilateral diplomacy at the Geneva Institute for International Studies and public administration at the Ghana Institute of Management and Public Administration. Ambassador Martha Pobee is married to John Samuel Pobee, an Anglican bishop and Emeritus Professor at the University of Ghana, on 26 July 1994. She is a Roman Catholic.