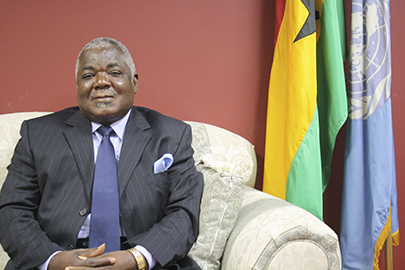 Immediate past Director of State Protocol and one of Ghana’s longest serving Foreign Service officials – Ken Kanda, has begun his work as Ghana’s newly appointed Permanent Representative to the United Nations at Ghana’s Permanent Mission on 47th Street in New York City. Ambassador Ken Kanda comes as Ghana’s 13th diplomat to the international body since Ghana joined shortly after independence in 1957. Having previously served as a diplomat at Ghana’s missions in Bonn, Copenhagen, Harare and Berlin during his 35 year career, President Atta Mills expressed great confidence in his capabilities during his swearing-in ceremony in Accra, shortly before his departure.

Granting his first interview to AMIP News on his very first day at work, Ambassador Kanda expressed optimism about the presidency and the state of Ghana’s democracy and economy. “…We are in the process of getting to the Promised Land. The main goal now is to improve the living standards of the people, lifting people out of the quagmire of poverty,” using the words of President Atta Mills. “The President has declared 2011 a year of action, meaning we will see visible signs of improvement in the form of infrastructure – schools, hospitals, roads, etc.”

To critics of the President and the current government, Ambassador Kanda explained that the President himself has assured Ghanaians that while he may seem slow, he is sure to deliver. “…My government met a difficult financial situation when we came into power but after two years of planning Ghana’s is poised for growth. The unfortunate wave of crime that hit Ghana about three years ago has been contained and our first oil revenues have started coming in…”

Responding to a question about the relevance of the United Nations in today’s world, the current composition of the Security Council and his expectations, Ambassador Kanda stated that the relevance of the world body was as crucial today as when it was first established. “The UN is the best institution for the world, we need the UN. Reform of any kind will be slow but eventually it will take place. Pursuing Africa’s representation on the Security Council is worthwhile. The difficulty would be selecting the African country, but even that the AU should be able to work out a formula.”

Ambassador Kanda is also optimistic that the African Union in conjunction with the United Nations and other world agencies will find a resolution to the crisis brewing in La Cote d’Ivoire and Libya. During the interview he pledged to make an effort to reach out to the Ghanaian Diaspora as much as possible to offer any help within his power. “I am a believer in the Ghanaian wherever he is; I will definitely find time to get deeply involved with the Ghanaian associations.”

Ambassador Kanda joined the Foreign Service as a young officer in 1976 and rose through the ranks to Chief of Protocol of the Ministry. Before his last appointment as Director of State Protocol, he was once Deputy Director of State Protocol for then Vice President Atta Mills. Earlier in his career he studied at Princeton University, United States as a Hubert Humphrey Fellow. The Ghanaian community in the United States welcomes Ambassador Kanda and wishes him the best in his new role.

The following have served as Ghana’s envoys to the United Nations since 1957:

Ghana’s Permanent Mission to the UN and the Consulate General are located in the same building at 19 East 47th Street, New York, NY.