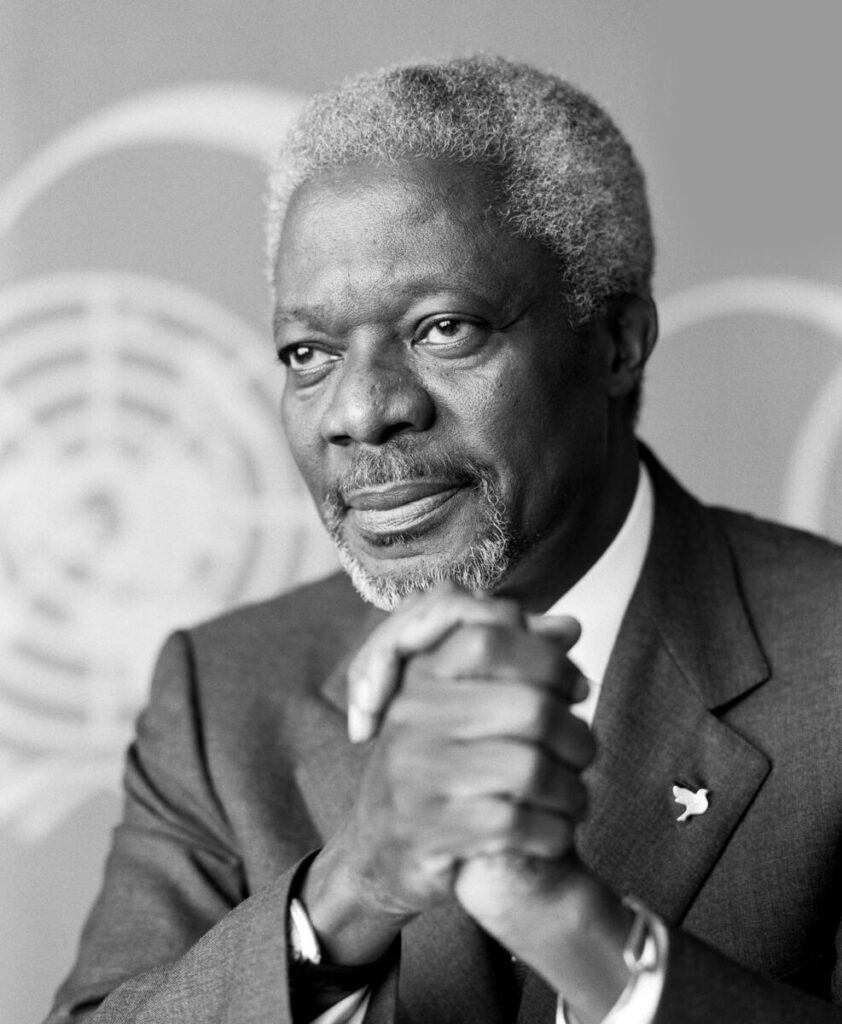 Kofi A. Annan of Ghana, the seventh Secretary-General of the United Nations, served from 1997 to 2006 and was the first to emerge from the ranks of United Nations staff.

One of Mr. Annan’s main priorities as Secretary-General was a comprehensive programme of reform aimed at revitalizing the United Nations and making the international system more effective. He was a constant advocate for human rights, the rule of law, the Millennium Development Goals and Africa, and sought to bring the Organization closer to the global public by forging ties with civil society, the private sector and other partners.

At Mr. Annan’s initiative, UN peacekeeping was strengthened in ways that enabled the United Nations to cope with a rapid rise in the number of operations and personnel. It was also at Mr. Annan’s urging that, in 2005, Member States established two new intergovernmental bodies: the Peacebuilding Commission and the Human Rights Council. Mr. Annan likewise played a central role in the creation of the Global Fund to fight AIDS, Tuberculosis and Malaria, the adoption of the UN’s first-ever counter-terrorism strategy, and the acceptance by Member States of the “responsibility to protect” people from genocide, war crimes, ethnic cleansing and crimes against humanity. His “Global Compact” initiative, launched in 1999, has become the world’s largest effort to promote corporate social responsibility.

Mr. Annan undertook wide-ranging diplomatic initiatives. In 1998, he helped to ease the transition to civilian rule in Nigeria . Also that year, he visited Iraq in an effort to resolve an impasse between that country and the Security Council over compliance with resolutions involving weapons inspections and other matters — an effort that helped to avoid an outbreak of hostilities, which was imminent at that time. In 1999, he was deeply involved in the process by which Timor-Leste gained independence from Indonesia . He was responsible for certifying Israel ‘s withdrawal from Lebanon in 2000, and in 2006, his efforts contributed to securing a cessation of hostilities between Israel and Hizbollah. Also in 2006, he mediated a settlement of the dispute between Cameroon and Nigeria over the Bakassi peninsula through implementation of the judgement of the International Court of Justice. His efforts to strengthen the Organization’s management, coherence and accountability involved major investments in training and technology, the introduction of a new whistleblower policy and financial disclosure requirements, and steps aimed at improving coordination at the country level.

Mr. Annan joined the UN system in 1962 as an administrative and budget officer with the World Health Organization in Geneva. He later served with the Economic Commission for Africa in Addis Ababa, the UN Emergency Force (UNEF II) in Ismailia, the United Nations High Commissioner for Refugees (UNHCR) in Geneva, and in various senior posts in New York dealing with human resources, budget, finance and staff security. Immediately before becoming Secretary-General, he was Under-Secretary-General for Peacekeeping. Mr. Annan also served as Special Representative of the Secretary-General to the former Yugoslavia (1995-1996), and facilitated the repatriation from Iraq of more than 900 international staff and other non-Iraqi nationals (1990).

Mr. Annan studied at the University of Science and Technology in Kumasi, Ghana, and completed his undergraduate work in economics at Macalester College in St. Paul, Minnesota in 1961. In 1961-1962, he undertook graduate studies at the Institute of International Affairs in Geneva, and in 1972 earned a Master of Science degree at the Massachusetts Institute of Technology’s Sloan School of Management.

Mr. Annan was awarded the 2001 Nobel Prize for Peace, jointly with the Organization. He has also received numerous honorary degrees and many other national and international prizes, medals and honours.

Mr. Annan was born in Kumasi, Ghana, on 8 April 1938, and was fluent in English, French and several African languages.
Kofi Annan died on 18 August 2018 in Bern, Switzerland, at the age of 80. 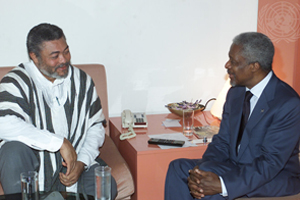 Kofi Annan with the former President Rawlings of Ghana 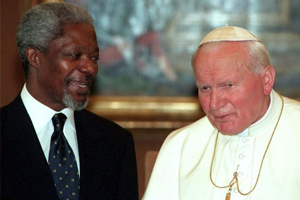 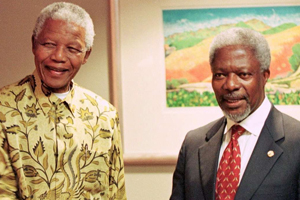 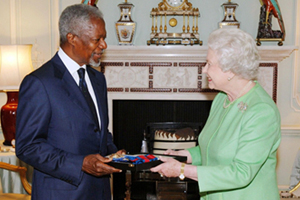 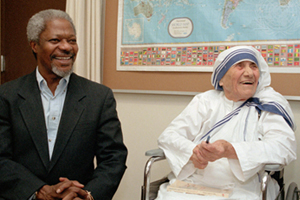 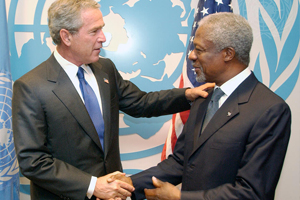