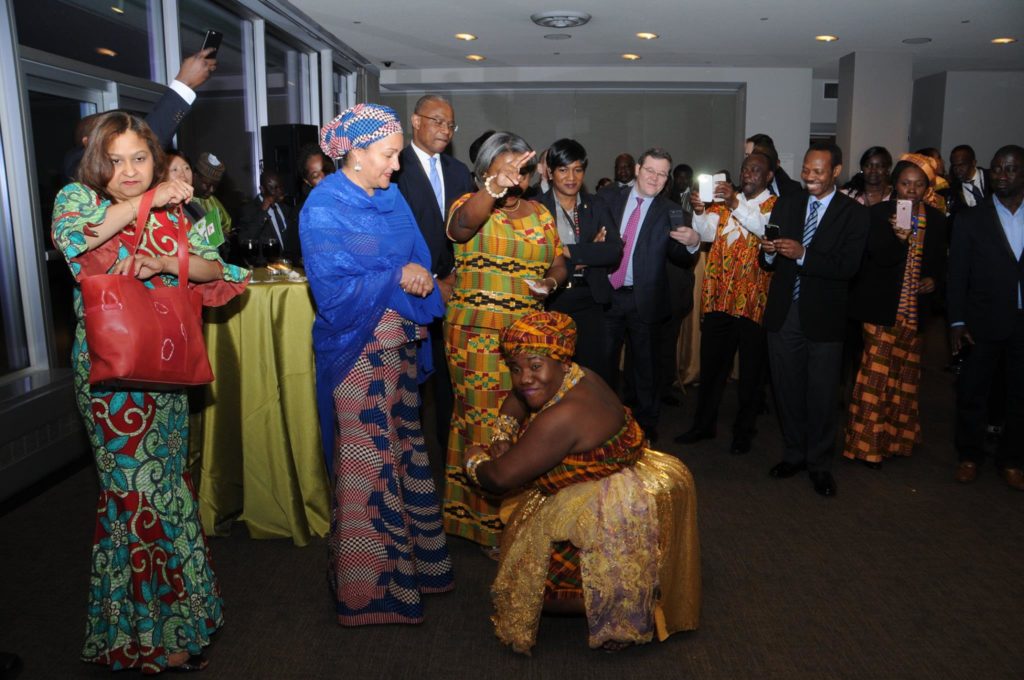 Members of the diplomatic corps, friends of Ghana and Ghanaians in the New York tri-state area were treated to a festive and colorful reception at the United Nations Headquarters in New York on Monday evening (March 6, 2017) to mark Ghana’s 60th independence anniversary.

Among the dignitaries were the Deputy United Nations Secretary General, Ms. Amina Mohammed, senior staff of the UN as well as representatives of the various Ghanaian professional groups, some of whom were in their rich kente clothes and other traditional outfits.

The evening was interspersed with lively and soothing Ghanaian music and cultural dance performances.

The invited guests were treated to sumptuous and delicious Ghanaian dishes, made in Ghana drinks and the much touted Golden Tree chocolate.

Addressing the gathering, Ambassador Martha Ama Akyaa Pobee, Ghana’s Permanent Representative to the United Nations, noted that the historical context of Ghana’s independence and the international environment 60 years ago, made it urgent for the young nation at that time to establish herself as a worthy and respected member of the international community.

“The founding fathers of Ghana, led by the late Dr. Kwame Nkrumah, believed that the United Nations was the appropriate forum to achieve this objective and most importantly, the platform to leapfrog the pace of decolonization of the African content.

“It was also borne out of our desire for peaceful co-existence and the creation of an international economic order in which the economic, social and political development of all people’s irrespective of colour, creed or race could be advanced”, she stated.

Ambassador Pobee maintained that the UN has proved to be a dependable partner and therefore Ghana is pleased with what had been achieved in the last 60 years.

Reiterating Ghana’s commitment to the values of democracy, respect for human rights and the rule of law, the Permanent Representative assured Member States and international organisations of her country’s desire to maintain and deepen the existing alliances and bonds of her friendship.

The Ambassador and Permanent Representative expressed Ghana’s readiness to work closely with other member states to make the UN fit for purpose and to meet today’s challenges. She mentioned in this regard, Ghana’s support for a reform of the Security Council in line with the common African position adopted in Ezulwini, the revitalization of the General Assembly, more effective application of preventive diplomacy in the peacebuilding architecture of the organization and the promotion of international financial and trade environment that are supportive of national development.

Ambassador Pobee repeated the call by President Nana Addo Dankwa Akufo-Addo at the 60th Independence Day parade at the Black Star Square in Accra to all “Ghanaians to mobilize for a prosperous future, in which all nationals, including our youth, our women and vulnerable in society, will have equal opportunities to realize their potentials”.

Again, she harped on the President’s concern about the state of Ghana’s environment and the need to protect the forests, rivers and lakes by building a sustainable economy that would generate prosperity and dignified life for the masses of the people.

On the President’s broad policy vision, she re-echoed government’s commitment to “build an educated, skilled and skillful society in which the creative juices of innovators will be stimulated to create wealth and compete in the global economy.

She intimated that the President’s vision and call for hard work, enterprise, creativity and consistent fight against corruption in public life, clearly spoke to and provided the framework for Ghana’s national implementation of Agenda 2030.

Maintaining that one of the most significant contributions of Ghana to the United Nations was in the area of human resource, Ambassador Martha Pobee paid glowing tribute to the late Ambassador Alex Quaison-Sackey, the first black African to be appointed President of the UN General Assembly, Madam Mary Chinery Hesse, the first African woman resident coordinator of the UN system, Mr. Kofi Annan, seventh UN Secretary General and the first to emerge from the ranks of the UN staff as well as many other Ghanaians on the staff of the Organization for their impressive contribution.

She expressed her country’s appreciation for the UN’s technical and other assistance to support Ghana’s development programmes.