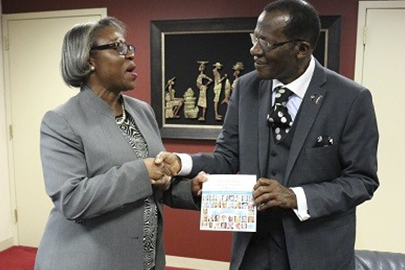 Ghana Mission,New York – Daasebre Prof. (Emeritus) Emmanuel Oti Boateng, a former Ghana Government Statistician and a member of the United Nations Statistical Commission (UNSC), the highest decision making body for international statistics has donated 10 copies of a booklet published by the UNSC in honour of its past chairs of the Commission to President Nana Akufo Addo and some members of his government.

The booklet is in appreciation of the work done by the 32 (chairs of the UNSC) Chief Statisticians from all over the world in the 70 years history of the UNSC, particularly for pursuing the advancement of official statistics, promoting the development of statistical information as an essential instrument for development and as a contribution to public policy and private action.

Making the donation through Ghana’s Permanent Representative to the UN, Ambassador Martha Pobee, at the Mission in New York today (March 29, 2017), Daasebre Oti Boateng, the first African to chair the UNSC, which also sets statistical standards, develops concepts and methods and their implementation said he felt obliged to donate the books to the Ghana government.

Daasebre Oti Boateng, who is also the Paramount Chief of New Juaben Traditional area and currently attending the 84thsession of the International Civil Service Commission (ICSC) at the UN headquarters (New York) observed that although the Sustainable Development Goals (SDGs), the universal call to action to end poverty, protect the planet and ensure that all people enjoy peace and prosperity. are well crafted in terms of the 17 goals and 169 targets, “it was rather weak in its implementation plan.

“For the strategies to be effected there’s the need for the communities to be involved in the implementation, because they are the first line and legitimate owners affected by poverty ”, he explained.

Daasebre Oti Boateng, who was decorated with an insignia of the ICSC, also stated that effective women empowerment is essential for sustainable development.

This was after he had presented a copy of the book to Ambassador Pobee and commended her for being the first woman to be appointed as the PR of Ghana to the UN.

He stressed the need to get more women in leadership positions, emphasizing that ”the time has come, and the moment is now for both genders to work as equal partners in sustainable development in a stable and just society”.

Daasebre Oti Boateng was re-elected to serve on the ICSC at the Fifth Committee’s formal meeting in New York on November 7, 2014. He was the chair of the UNSC in 1987 and has been a member of the ICSC since 2003.