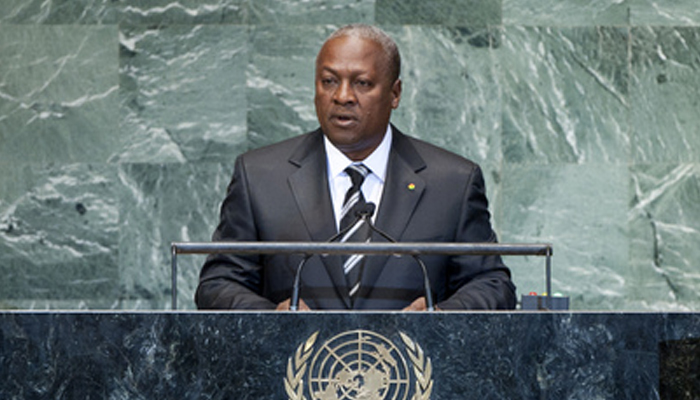 JOHN DRAMANI MAHAMA, President of Ghana, said that in the wake of the death of former Ghanaian leader John Atta Mills, the people of the country had proven their resilience and commitment to promoting the values of peace. They had also been respectful of the institutions that safeguarded and maintained Ghana’s stable democracy. As for the state of the wider continent, he hailed Africa’s fast-growing economies and the strides many countries were taking to consolidate or launch democratic governance. “As is true of all new democracies, these systems are not without flaws. And while they may not be perfect, they are promising,” he said. Further, the number of countries engaged in active conflict was decreasing, and that Ethiopia, Malawi, as well as Ghana, had all lost their leaders and had carried out seamless, peaceful constitutional transitions to new Governments.

“So you see, today, something spectacular is happening in Africa. Growth has replaced stagnation; tranquillity has replaced turmoil and democratic governance and the rule of law is replacing dictatorship,” he declared, underscoring that such significant developments required long-held misconceptions about the continent to be reassessed. As for Ghana itself, he said, tremendous strides had been made in a number of areas, including in target areas set by the Millennium Declaration, such as reducing extreme poverty, achieving gender equality in schools, providing safe drinking water and fighting the spread of HIV/AIDS.

Yet, he said that, like most countries today, Ghana was grappling with unemployment, and taking aggressive steps to find long-term, sustainable solutions. The Government was working assiduously to empower and support young people and to ensure they would not be left behind in today’s rapidly changing socio-economic and political conditions. He said that social programmes were also being implemented across all spheres to ensure safety nets for the poor and vulnerable and to ensure that all citizens could reap the benefit of the country’s economic progress. Massive investments were being made in education, agriculture, and social infrastructure, as well as in direct payments to the poorest households.

Turning to political matters, he said that Ghana was just a few weeks away from conducting its presidential and parliamentary elections, and he assured the international community that the polls would be free, fair and peaceful. Looking next at the wider subregion, he said Ghana had long adhered to a policy of peace even as West Africa had been ravaged by civil war for years on end. Because Ghana wished to coexist harmoniously with its neighbours, it was conscious of the need to maintain peace and stability when legislating national policies. And when offering asylum or safe haven to refuges, it aimed to ensure that conflicts never spilled over its borders. To that end, he said that mounting tensions in Côte d’Ivoire and Mali were of particular concern.

“ Ghana will not allow its territory to be used to destabilize other nations,” he declared, stressing that neither would Ghana be used as a storehouse for resources or weapons that would be used to undermine peace and development in the region. He pledged to work with structures set up by ECOWAS, and to employ Ghana’s diplomatic tools to help ensure that security was restored in both Côte d’Ivoire and Mali. As for situations of concern outside the continent, he said that Ghana supported the creation of an independent Palestinian State, coexisting peacefully with a stable and secure Israel. His Government also reiterated its opposition to the long-standing economic blockade against Cuba. Finally, he hailed the birth of a “new Africa”, one that was not burdened by debt, corruption and poverty. Such a new Africa would stand on the world stage as a mutual partner. Yet, with such partnership must come recognition of current realities and the role Africa must now play in vital decision-making bodies. As such, the Security Council must be expanded, so that body’s decisions could have a meaningful impact on the day’s important challenges.