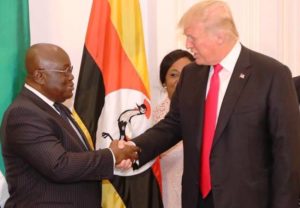 The 8 Heads of State present at the meeting were President Muhammadu Buhari of Nigeria, President Alasanne Ouattara of Côte d’Ivoire, President Jacob Zuma of South Africa, President Macky Sall of Senegal, President Alpha Conde of Guinea, who is also Chairperson of the African Union, President Yoweri Museveni of Uganda, and President Hage Geingob of Namibia.

In his remarks, President Trump noted that in the 8 African leaders gathered at the meeting, “I see partners for promoting prosperity and peace on a range of economic, humanitarian, and security issues”.

The US President indicated further that his administration is committed to extending partnerships with the 9 countries, because they “are committed to self-reliance and to fostering opportunities for job creation in both Africa and the United States.”

Of the world’s ten fastest-growing economies, President Trump noted that six are in Africa, and, thus, increasing American trade and investment across diverse industries — including agriculture, energy, transportation, healthcare, travel, and tourism — will further transform lives throughout Africa.

He reiterated the commitment of the United States to partner with countries and organizations, like the African Union, that lead successful efforts to end violence, to prevent the spread of terrorism, and to respond to humanitarian crises.
“Terrorist groups, such as ISIS, al-Shabaab, Boko Haram, and al Qaeda also threaten African peace. The United States is proud to work with you to eradicate terrorist safe havens, to cut off their finances, and to discredit their depraved ideology,” he added.

On the issue of North Korea, President Trump stated that the world faces an enormous security threat from the North Korean regime, and urged all nations to “stand together and be accountable in implementing United Nations sanctions and resolutions in response to North Korea’s hostile and menacing actions.”

A free, independent, and democratic nation, he stressed, “in all cases, is the best vehicle for human happiness and success.”

Present also at the meeting were Foreign Ministers of the 8 African countries present; US Secretary of State, Rex Tillerson; Chief of Staff, Gen. John Kelly; the Permanent Representative to the United Nations, Nikki Haley; and other representatives of the US government.

He noted that the 21st century will see Africa take its rightful place on the world stage, and will without doubt be a century in which Africans are going to are going to count for more and in a decisive way, because there is an ever-greater determination among Africa’s leaders and youth that the hour of renewal has arrived.