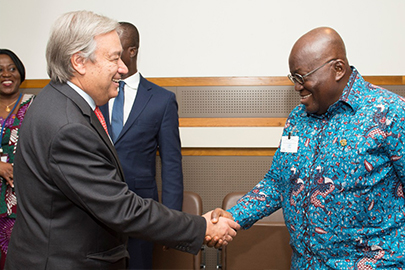 The President of the Republic, Nana Addo Dankwa Akufo-Addo, has been re-appointed by the Secretary General of the United Nations, António Guterres, to serve as Co-Chair of the Eminent Group of Sustainable Development Goals Advocates for an additional two years.

It will be recalled that President Akufo-Addo was first appointed as Co-Chair of the Secretary-General’s Sustainable Development Goals (SDGs) Advocates, along with Prime Minister Erna Solberg of Norway, in April 2017.

With the mandate of the current group of Advocates ending in December 2018, the President will continue to serve in this capacity, per the letter of invitation from the United Nations Secretary-General.

The letter from the UN Secretary General to President Akufo-Addo stated that “given your strong commitment to the 2030 Agenda, it gives me great pleasure to invite you to remain as co-chair of the SDGs Advocates for an additional two years, until 31 December 2020.”

In response to a letter from the UN Secretary-General, dated 17th October, 2018, the President expressed appreciation for the trust and confidence that the Secretary General has reposed in him to continue working with his fellow Advocates towards the accelerated realization of the Sustainable Development Goals.

The SDG Advocates consists of 17 eminent persons assisting the UN Secretary-General in the campaign to achieve the Sustainable Development Goals adopted by world leaders in September 2015.

With a mandate to support the Secretary-General in his efforts to generate momentum and commitment to achieve the SDGs by 2030, the Advocates have been working to promote the universal sustainable development agenda, to raise awareness of the integrated nature of the SDGs, and to foster the engagement of new stakeholders in the implementation of these Goals.