President of Ghana Statement Summary of the 70th session 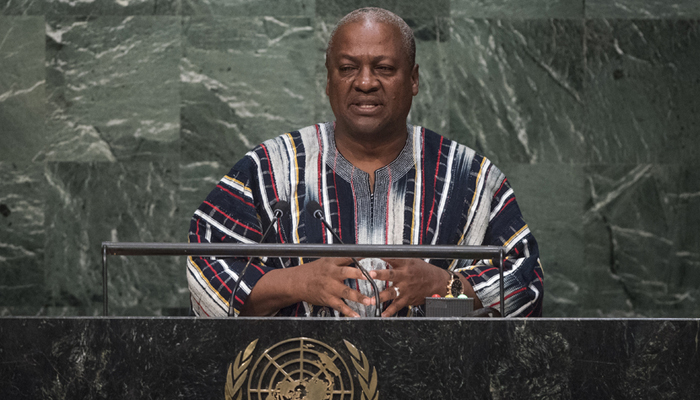 JOHN DRAMANI MAHAMA, President of Ghana, said that his country had not been among the 51 nations who had convened in San Francisco in April 1945 because it had taken another 22 years for the then-Gold Coast colony to gain independence.  Like Ghana, many countries represented today were not in existence as sovereign nations then.  Calling for greater inclusivity at the United Nations, he noted the tragedies of Sandra Bland, who had died in police custody in Texas, and Aylan Kurdi, who had washed up on the shore of a beach in Turkey.  The list of names was long, with thousands dead in Syria, Pakistan, Nigeria, Mexico, Afghanistan, Somalia and thousands more dead in the Mediterranean Sea while attempting to flee poverty and political strife.  Some of the very institutions that had been set in place to protect peace were the very ones violating their mandates.

Most of the poorest people in the world were women, he said, and women’s empowerment programmes and policies had not addressed how many traditions inculcated a vast inequality between men and women.  Ghana’s Livelihood Empowerment Against Poverty programme provided cash grants and entitled recipients to free health care.  The country had also made tremendous progress in the basic education target of the Millennium Development Goals.  But, what had happened beyond the primary level was another matter altogether, with young girls often taken out of school and married off.  Ghana had launched a campaign, under the auspices of United Nations Children’s Fund (UNICEF), to keep young girls in school until they had completed their education.

Watching the Pope being driven through the city in a tiny Fiat 500, he continued, was a powerful lesson about the changes that must be made to confront the future.  The Pontiff’s small vehicle, surrounded and dwarfed by humongous sports utility vehicles, had also reminded him of the relationship between so-called developing nations and the wealthier, larger nations of the world.  In recent years, many African nations had embraced democracy and fair elections had become a regular occurrence on the continent’s calendar.  His own country was considered one of the “bright lights of Africa”.  But, with the current uncertainty in international markets, strong cooperation with bilateral and multilateral partners was necessary to achieve fiscal consolidation.  Africa also faced a shortage of power and the road ahead demanded that the international community achieve energy sufficiency in a sustainable manner.